“A to Z for Ewe and Me” Completed

I completed the machine quilting, binding and embellishing of The Quilt Show’s 2014 BOM designed by Janet Stone, famous for her alphabet quilts of all descriptions:

The blue background, appliqued border has pebble, fern and feather quilting motifs as well as a little grass under the sheep! I used Bottom Line in a light blue for this quilting. 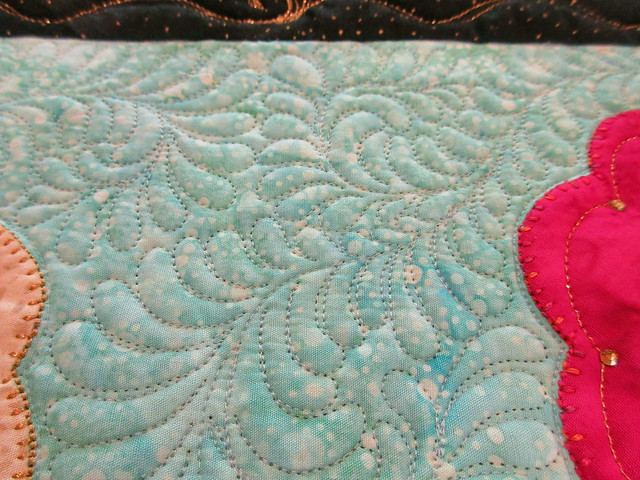 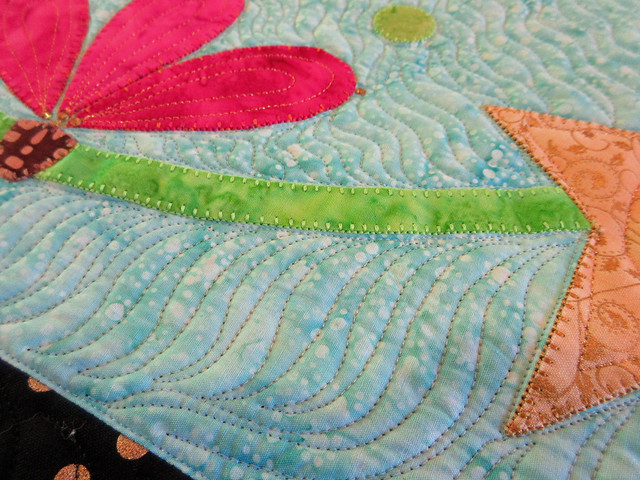 All the background olive green fabric in the block backgrounds was quilted with diagonal, parallel lines in Bottom Line in an olive green.

The black outside borders were quilted in a feather/fern motif using black Bottom Line thread.

Since this is an alphabet quilt after all, I quilted the alphabet among the feather/fern quilting all around the black border as well. The letters are barely visible:

The letters are easier to see from the backing: 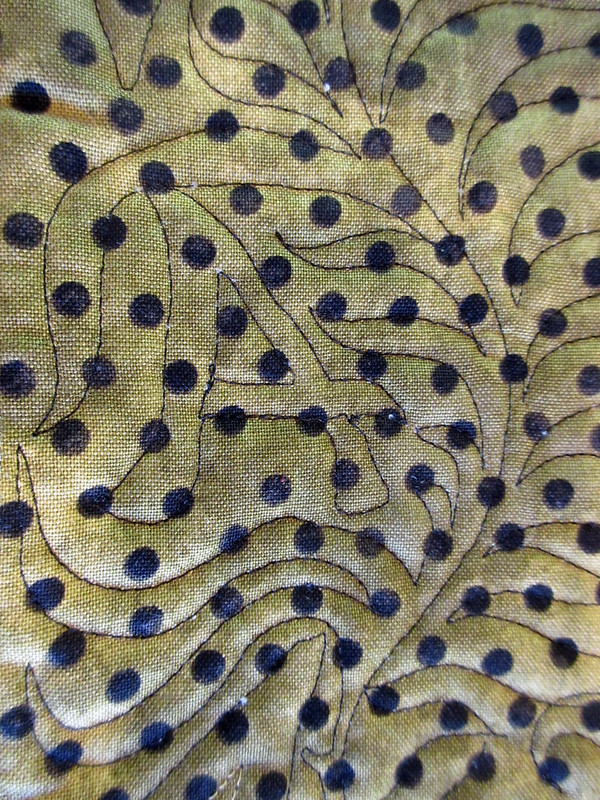 All the blocks have some quilting in Superior’s gold metallic thread. You can see an example in the sides and sails of the boats in this block: 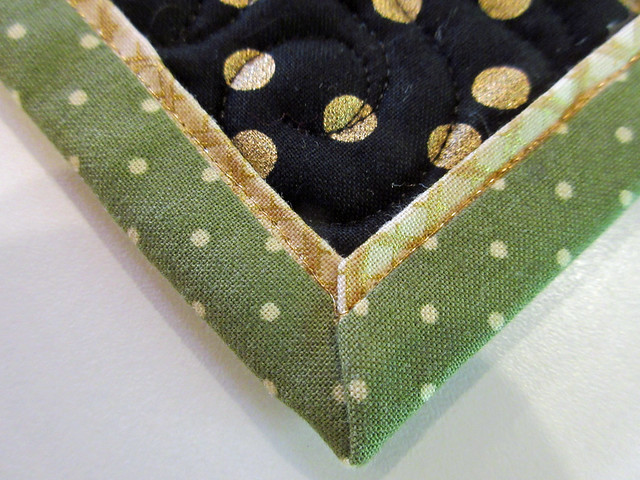 I used the Superior gold metallic thread to quilt a scroll motif in the narrow black sashing:

I embellished the entire quilt with gold colored hot fix crystals. I applied a single crystal to each small star in the blocks and blue border:

I applied a single crystal to each appliqued black letter: 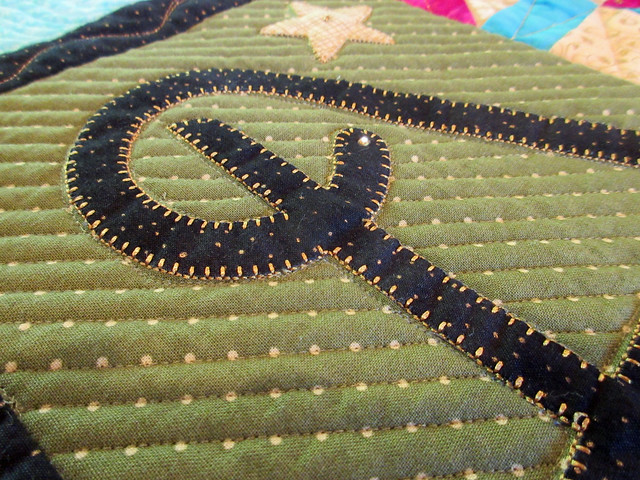 Where there was some sky in a block I applied crystals to look like twinkling stars:

I gave this flower in the border a crystal choker:

The sheep have crystal eyes:

The rest of the flowers along the lower blue border: 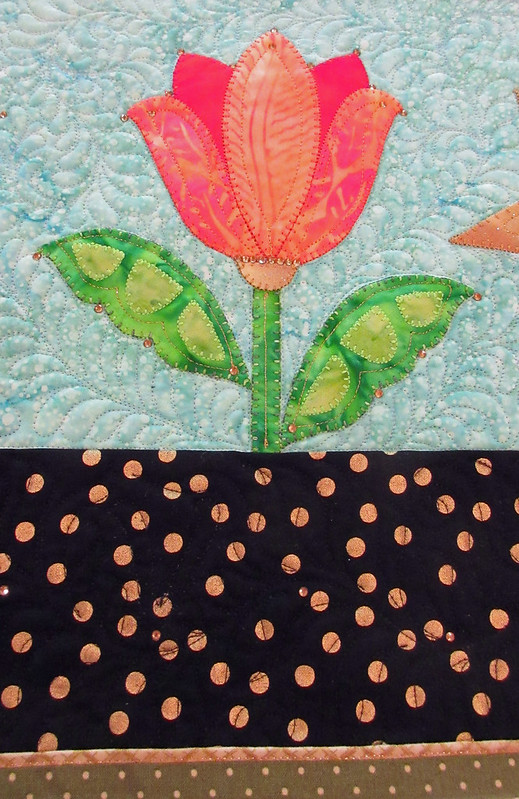 I sewed a star shaped button in the center of each of the large appliqued stars in the blue border:

The backing is an olive fabric with black dots on it:

Some trees in the blue border: 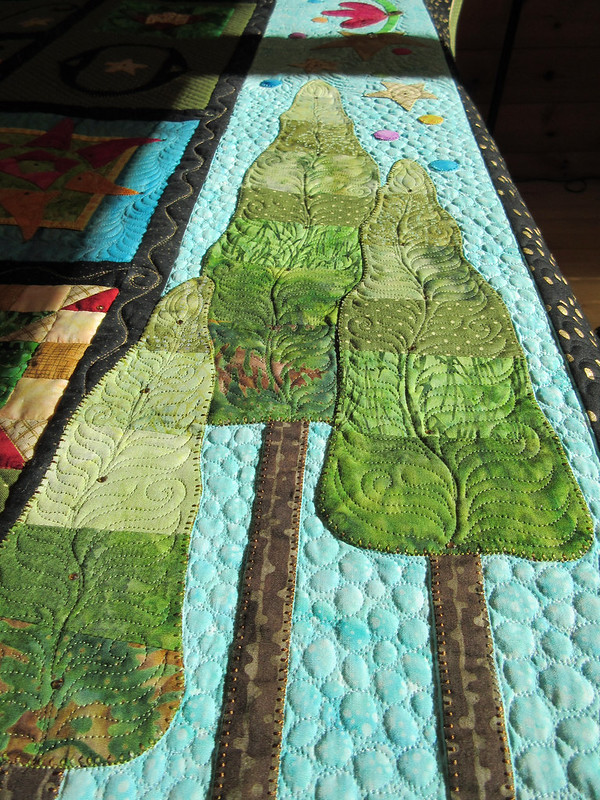 Maybe you can see some of the other crystals and gold metallic quilting in this little video featuring each block. Turn the volume up, press the arrow and enjoy:

This entry was posted in A to Z for Ewe and Me, Quilting, Uncategorized. Bookmark the permalink.

5 Responses to “A to Z for Ewe and Me” Completed