I was asked to make a quilt to commemorate a family reunion of my husband’s first cousins on his father’s side of the family. For a quilt designer, having a meaningful occasion to inspire a design is wonderful. I started thinking about the family’s emigration to the United States and how the family grew. So I devised a design representing several generations up through and beyond the cousins’ generation using traditional quilting blocks. The resulting quilt has a traditional quilt block design known as “Lone Star” in the center. This central star represents Henry and Mary, the cousins’ grandparents. Resting in the arms of the Lone Star are eight traditional “Mariner’s Compass” blocks representing each of Henry and Mary’s eight children. Surrounding the eight Mariner’s compasses is a band of thirty two stars representing the cousins in the third generation. Finally, if you look closely, the dark blue background fabric filling out the corners of the quilt has many, many tiny white stars representing all the further generations in the family. The quilt is bordered in what looks like a gold braid pattern, but upon closer examination reveals itself to be small “T’s” representing the family’s last name. 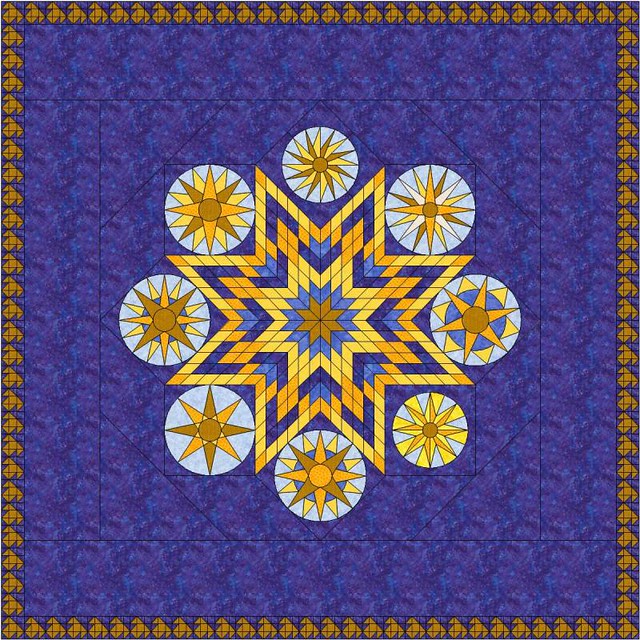 . . . with a block design because the software did not allow the curved band with the 32 stars to be placed directly on the quilt design (At least I could not figure out how to do it!)

I started the sewing with the eight different Mariner’s Compass blocks: 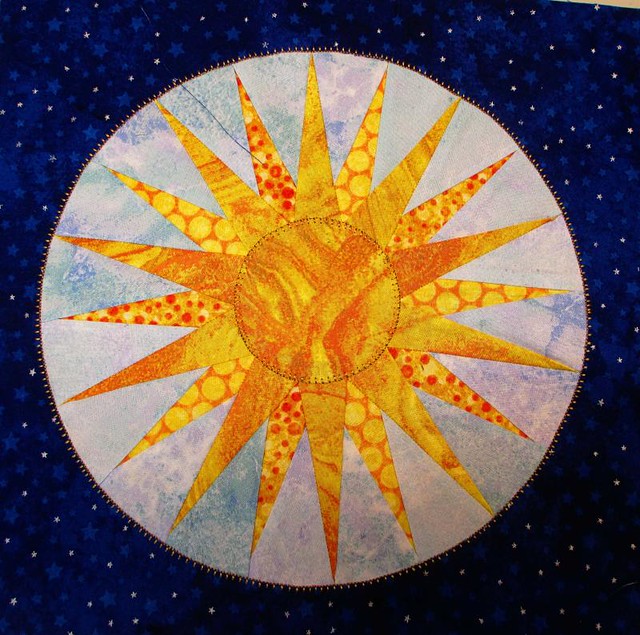 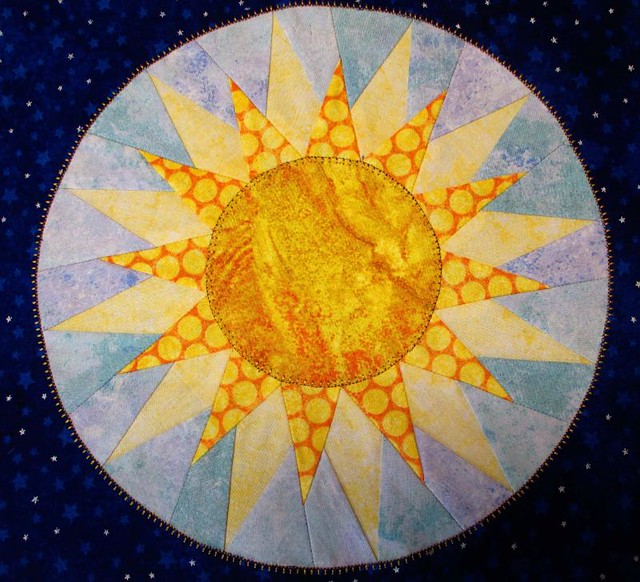 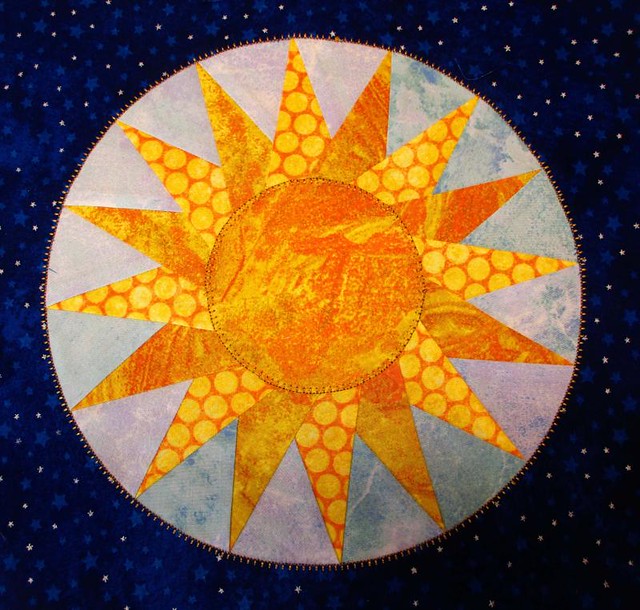 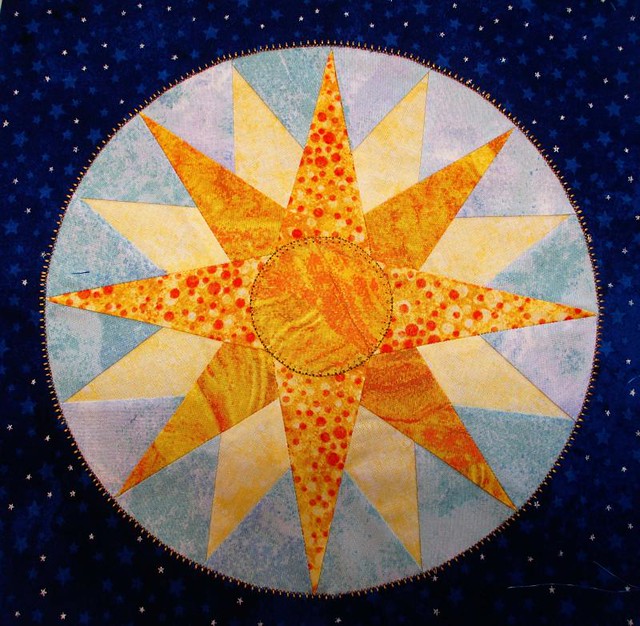 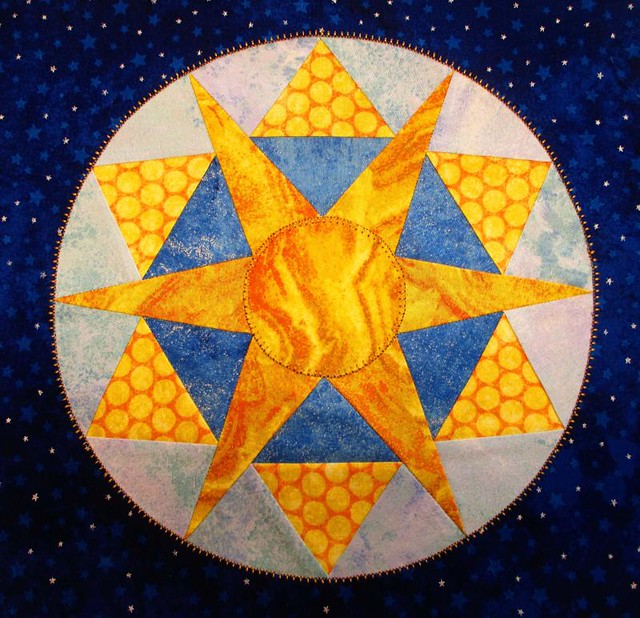 The next step was to make the central “Lone Star.” Here you can see the eight arms of the central star with the eight mariner’s compasses arrayed around it on my sewing table ready to be sewn together: 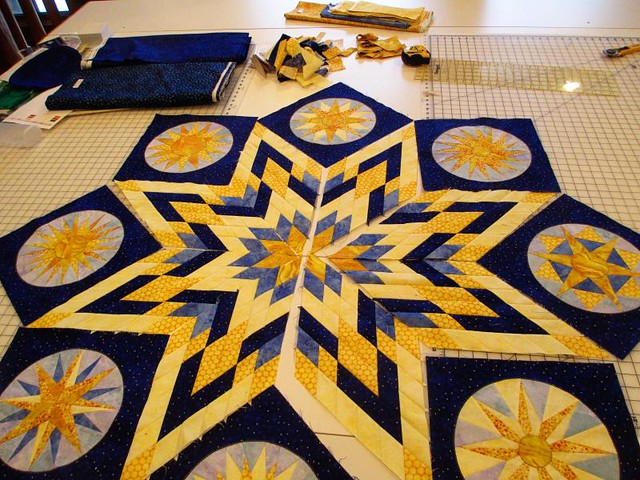 All the above sewn together with the addition of some background fabric making a rough octagon:

I used a yardstick as a rather large compass to draw a circle on the octagon:

Trimmed it to be a circle:

Pinned and sewed the band of 32 stars to the central circle:

Pressed the band of 32 stars toward the outer edge:

At this point in the construction, I decided to make the 108 3-inch “T” blocks for the outside border: 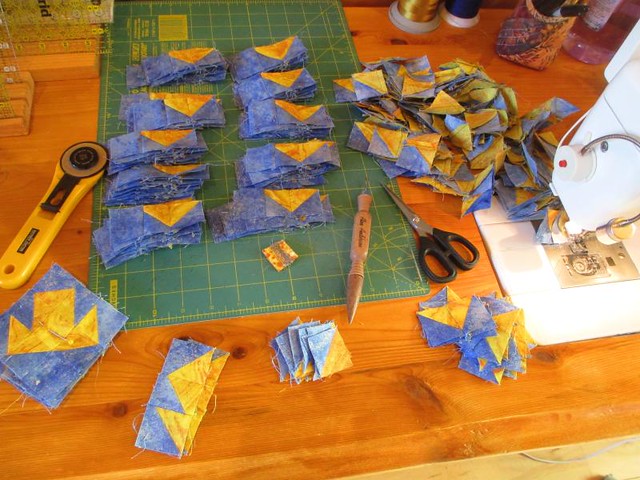 Each “T” block contained 16 pieces, so there were 1728 pieces in the whole border!

The borders on the work table with the center:

I pinned the background to the central circle:

Next, I sewed on the “T” borders. (That is the long-arm quilting machine in the background of the picture!):

At this point the quilt top was completed and ready to be loaded onto the long-arm machine for quilting:
For the border quilting, nothing fancy, mostly just stitch-in-the-ditch: 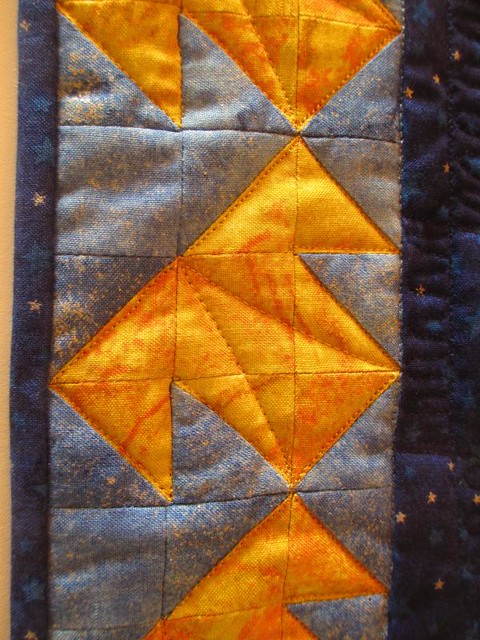 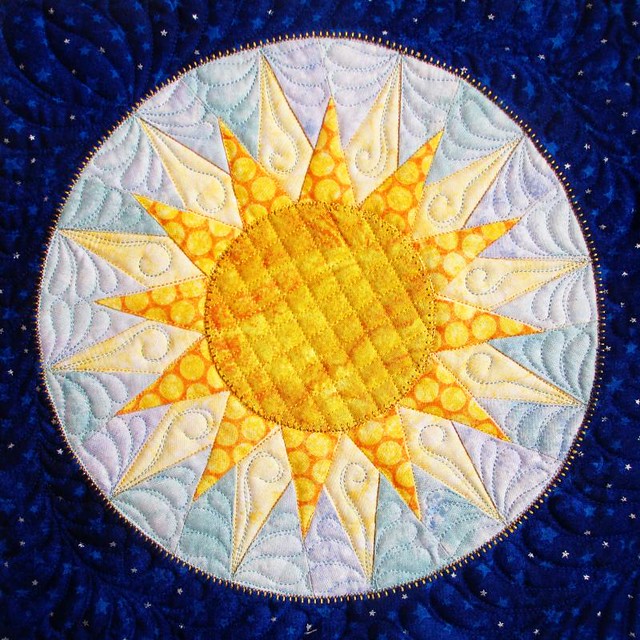 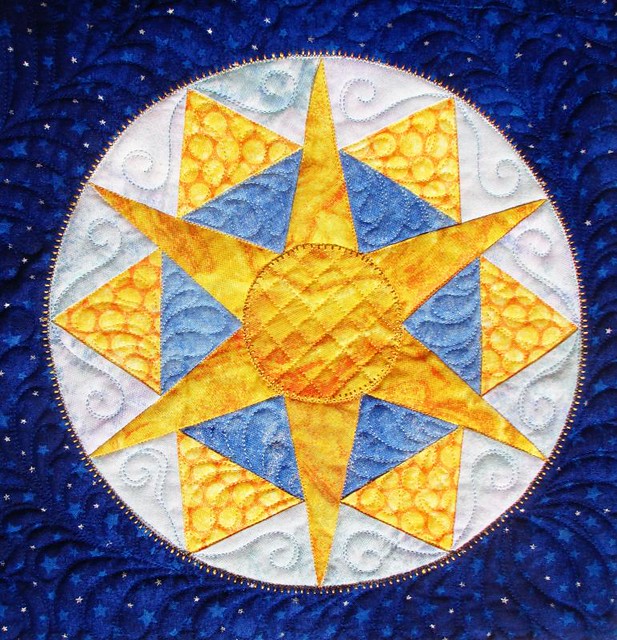 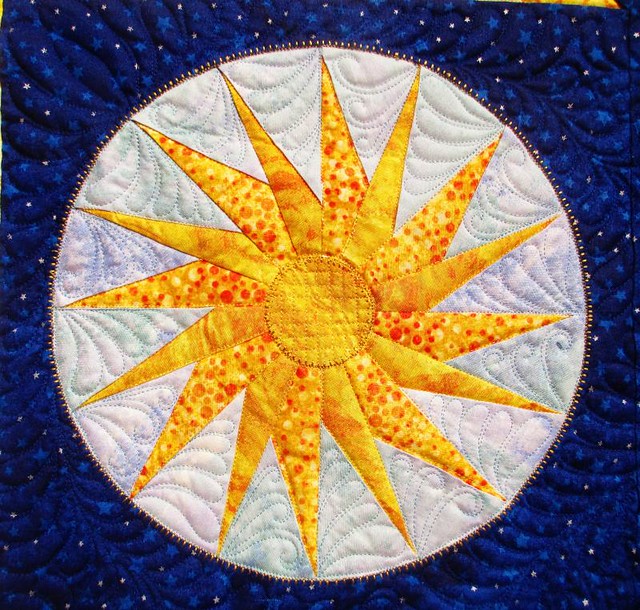 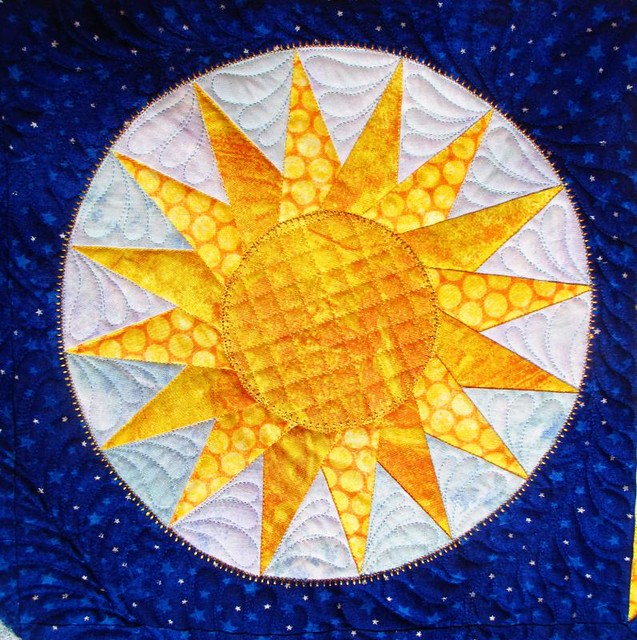 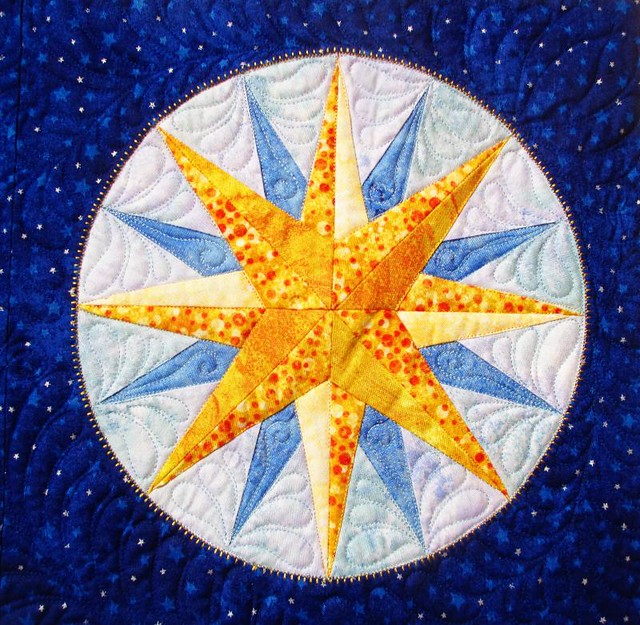 The corner backgrounds with the involute curve cross-hatch quilting: 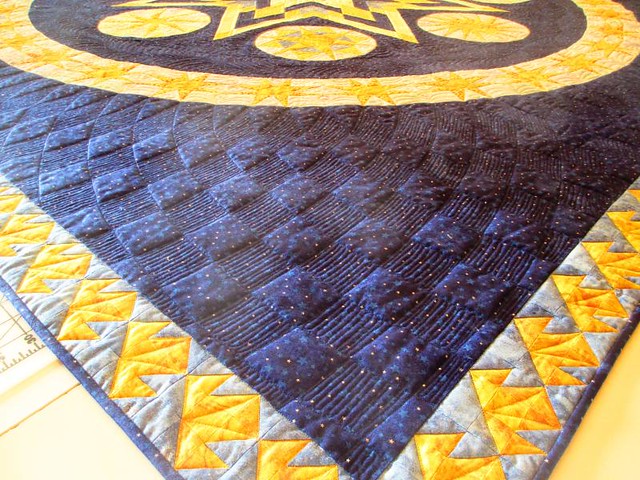 A view of the back of the quilt: 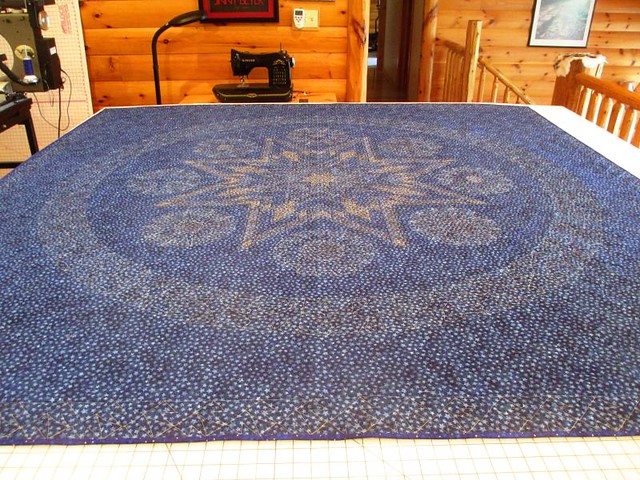 One of the Mariner’s Compasses from the back of the quilt: 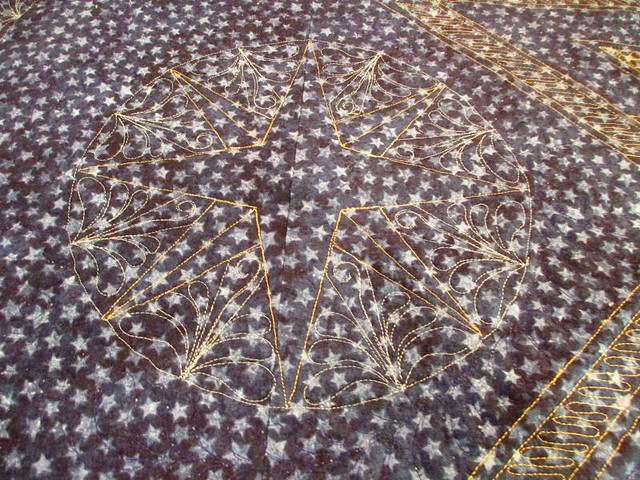 One more view of the finished quilt:

The quilt dimensions are 86 inches by 86 inches. The overall pattern was designed by using the EQ7 software program. The fabrics are all cotton quilting fabrics. The pieces were sewn together by machine and the quilting designs are original to this quilt and executed by hand guiding a long arm quilting machine. My husband developed the involute curve quilting design in the dark blue background and cut acrylic templates to help guide the long arm machine quilting. Since everyone always asks, I added them all up and there are 2,881 pieces!

This entry was posted in Cousins Constellation, Quilting. Bookmark the permalink.

6 Responses to The Cousins’ Constellation Quilt